Ben has invested over 40,000 hours studying human performance: working with athletes to create elite performance as well as coaching business professionals for high achievement. He has spent 20 years studying exercise physiology, exercise science, neurological and physical therapy methodologies. After finding the same limitations in all methods and techniques, research and personal experience lead him to the A.R.P.wave / Evolution Training System. Since 2001, Ben has been personally mentored by the co-founders of A.R.P.wave / Evolution Training in human performance and recovering people from all types of injury. During this time he has observed and assisted them with Elite Athletes including members of the 06′ NHL Stanley Cup and the 07′ Netherlands World Grand Prix Volleyball Champions. He is the first specialist in this combined system trained by the founders of both programs. His belief and passion in the system led him to found Optimum Performance Clinic in 2004. OPC was the first facility to offer the complete system under one roof.

Ben was first introduced to the world of Direct Sales and Network Marketing almost 17 years ago. He quickly saw the power of the business concept but choose to prioritize college sports over creating a business initially. After finishing his athletic career he discovered an opportunity that allowed him to pursue his passion for human performance without playing the 9-5 game. In his mid-20’s he built a network of over 5000 associates spanning 13 countries over a 3 year time frame. This allowed him the freedom to enjoy his residual income while he immersed himself in the process of becoming a specialist in human performance.

Today, the time freedom from residual income through network marketing has allowed Ben to become an ARP wave expert and consultant to doctors, high profile clients and elite athletes across the country. At age 35, he has an impressive client list of consulting and working with players, doctors and training staffs of several NFL teams including: Baltimore Ravens, Tennessee Titans, SF 49ers, NE Patriots, and Oakland Raiders. He also serves as a consultant to several athletes and trainers in the NBA, NHL, LPGA, PGA and USATF. He has had the privilege of working with 2 league MVP’s in the past 3 years. Ben’s passion is in educating and supporting his clients in understanding the “”why and how”” of being pain free and creating elite performance be it on the field or in the boardroom. His philosophy is that everyone has within them the ability to be great at whatever it is they want so long as they are willing to commit all that they are as a human-being to getting there. Ben is presently back in action in the network marketing industry as well both as a business performance coach and leader of a rapidly expanding team. He resides in the Boston area with his wife Dottie, son Liam and dog Barney (their 2nd son). 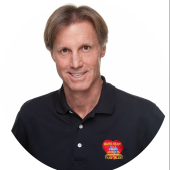 Episode 234 -The Mechanics of Prospecting: A System to Prospect